In this study, Taylor Jones and Jessica Kalbfeld demonstrate that Philadelphia court reporters consistently fail to meet 95% transcription accuracy when asked to transcribe mundane examples of spoken African American English (AAE).The grammatic structures and sound rules in AAE, and the difference between white and black accents in Philadelphia related to residential segregation, all conspire to produce transcriptions that are not only inaccurate, but that change the official record of who performed what actions, under which circumstances, potentially with dramatic legal repercussions for everyday speakers of AAE.

Presented by Master's Program in Teaching English to Speakers of Other Languages at Schools of Public Engagement.

MA Teaching English to Speakers of Other Languages 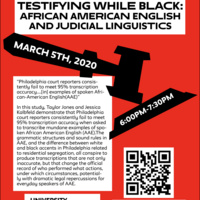