Join us for a timely screening and panel discussion of The Infiltrators (2019) documentary film about several undocumented youths who deliberately get detained by border patrol to infiltrate a for-profit detention center.

Through an electrifying mix of documentary interviews and narrative reenactment, The Infiltrators brings to life the incredible true story of the National Immigrant Youth Alliance, a group of young undocumented activists who embarked on an extraordinarily daring mission in 2012. They allowed themselves to be arrested by ICE in order to infiltrate a for-profit Florida detention center and help rescue fellow undocumented immigrants being held there. Charged with the crackling suspense of a thriller, this true-life tale of courage and resistance is equally enthralling and galvanizing as it exposes the injustices and inhumanity of America’s deeply broken deportation system.

Now because of the activism portrayed in the film and other occasions, Marco Saavedra faces potential deportation.

Following the screening, we will hear from Marco Saavedra, who now faces the next chapter in his struggle for migrant rights as he wages his own fight for asylum. This screening occurs on the night prior to his asylum hearing before an immigration judge and will be an opportunity to learn how you can support Marco and the larger struggle for the human rights of immigrants.

For more information about Marco Saavedra’s fight for asylum, click here to view the press release.

This event is hosted by the Lang Office of Civic Engagement and Social Justice, Food Studies Department at the Schools of Public Engagement, and The New School Sanctuary Working Group 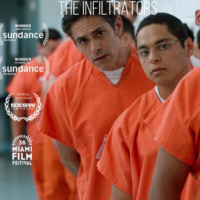