In this book, historian Carla Nappi and cultural theorist Dominic Pettman explore the use of fiction as a tool to write and think with works of theory. Taking Vilém Flusser’s Gestures as its point of inspiration and departure, Metagestures collects 16 pairs of short stories in which Pettman and Nappi make fictional worlds that animate and enliven each of the major gestures in Flusser’s book. Nappi and Pettman focus on Flusser’s mediations on the gestures of filming, planting, loving, smoking a pipe, turning a mask around, and much more, with their own creative explorations of each theme, in a gathering of short fictions that test, expand, and further the social scientific claims of the original text with new scenarios and occasions. Here, Flusser’s reflections on physical gesture serve as an inspiration for new ways of conceiving and conducting theory, and for thoughtful creative scholarly imagining, with and alongside one another.

Carla Nappi is Mellon Chair in History at the University of Pittsburgh. She has published widely on the history of bodies, medicine, and translation in early modern China. Currently she is conducting various collaborative experiments in historical pataphysics.

Dominic Pettman is Professor of Culture & Media at Eugene Lang College and The New School for Social Research. He is the author of numerous books on technology, humans, and other animals, including Creaturely Love and Sonic Intimacy.

Hosted by Punctum Books. Sponsored by the Department of Culture and Media, Eugene Lang College and the Liberal Studies MA Program, The New School for Social Research.

Free and open to the public. 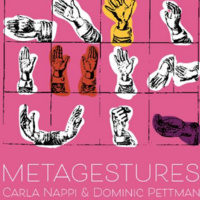