Join us for an evening with the Mannes Orchestra's Wind Ensemble, conducted by Mark Gould.

Known for their bold and adventurous programming, David Hayes and the Mannes Orchestra have been hailed by The New York Times for playing with "inviting warmth and solidity," and for their "intensity of focus."

The 2019/20 Season has many exciting performances, collaborations, and projects, including performances at Lincoln Center's Alice Tully Hall, John L. Tishman Auditorium at The New School, and appearances with the Mannes Opera at the Gerald W. Lynch Theater at John Jay College.

Mark Gould is one of the best-known trumpeters of his generation. He was principal trumpet of the Metropolitan Opera Orchestra from 1974-2003 and has been on the faculty of The Juilliard School since 1982. He joined the faculty of the Manhattan School of Music in September 2004. He has been very active as a trumpet soloist and conductor, and has conducted and performed as a soloist with the Seattle Symphony, San Diego Symphony, Colorado Philharmonic, Buffalo Symphony, The Juilliard Wind Ensemble, The Waterloo Festival, The Caramoor Festival and the Vermont Mozart Festival Orchestra. He is the director of The New York Trumpet Ensemble and has recorded 6 albums with them. He has been a frequent guest with Speculum Musicae, The Chamber Music Society of Lincoln Center, The MET Chamber Ensemble, Empire Brass, Canadian Brass, Summit Brass, The Graham Ashton Brass Ensemble and Extension Ensemble. As principal trumpet of The Metropolitan Opera, he participated in over 40 “Live from Lincoln Center” performances on PBS and numerous audio recordings of operas and symphonic works under the direction of James Levine, among which were the Grammy Award-winning recordings of The Ring of the Nibelung and Parsifal for Deutsche Grammophon.

Presented by the College of Performing Arts

Free and open to the public, no tickets are required. 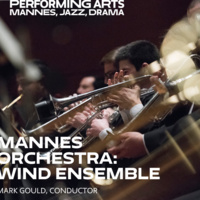