This concert series is the vehicle for JACK Quartet to bring distinctive voices that challenge the norms of concert music into conversation with audiences.

Crafted through years of close collaborative relationships and designed to bring new perspectives into the spotlight, JACK Frontiers introduces dynamic creators to our community and expands the notion of what a string quartet can be.

Clara Iannotta has quickly risen to prominence in Europe as one of the leading voices of her generation. Her sensitive ear to complex musical sounds has led her to create unique instrumental images in sonic poetry. Iannotta’s finely-tuned explorations reveal a new material from which to build an instrumental language. Jack has maintained a close relationship with her for several years, collaborating on two commissions and performing all four of her string quartets. This new work was commissioned with generous support by the Ernst von Siemens Music Foundation.

Lester St. Louis is a New York City-native cellist, composer, and intellectual. St. Louis rethinks how ideas are executed on stage through improvisational strategies and critical research, as well as a deeply humanistic and embodied relationship to sound. JACK and St. Louis have been engaging in readings and collaborative workshops for two years as they edge toward this milestone first novel. This is St. Louis’s first string quartet and is made possible by a grant from the Jerome Fund for New Music (JFund).

Tyshawn Sorey is a multi-instrumentalist and composer, already legendary for his unspeakable instrumental command, deep embodiment and memorization of the most involved scores, and a singular combination of formalistic structure and improvisation in his compositional work. Commissioned by the Banff Centre for Arts and Creativity, his first string quartet explores a shifting harmonic field controlled by the knife’s-edge precision of Sorey’s chess-master mind. In Everything Changes, Nothing Changes, shifting orchestrations and harmonic revelations unfold into a new state of musical thought and mental space for the audience to inhabit and meander.

Presented by The College of Performing Arts 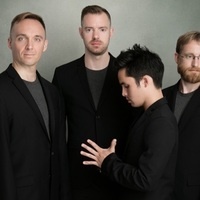