CANCELLED: India and China in the New Asian Geopolitics

India and China successfully managed their relationship for almost forty years. Recently, however, a narrative of India and China as destined for conflict has taken hold in public discourse in both countries. This lecture will examine whether this is so, and the role of changing Asian geopolitics in the shifting prospects of India-China relations.

He was previously National Security Advisor to the Prime Minister of India, Jan 2010-May 2014; Foreign Secretary of India, October 2006-July 2009; and has served as the Indian Ambassador or High Commissioner to China, Pakistan, Sri Lanka, and Israel.

In 2016 he published Choices; Inside the Making of Indian Foreign Policy (Brookings & Penguin Random House, 2016).

He has been a Fisher Family Fellow at the Kennedy School, Harvard University, 2015 and Richard Wilhelm Fellow at MIT in 2015. He was chosen as one of the “Top 100 Global Thinkers” by Foreign Policy magazine in 2010.

Presented by the India China Institute at The New School 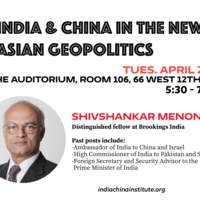