In 1999, during US led NATO bombing in former Yugoslavia, Ljilja and her two sons escape Belgrade to ironically seek refuge in the US. Over the course of the next four years, filmmaker follows this single mother, whose bitterness toward US foreign policy is still palpable, and her two sons as they make a new home in America.

The film focuses largely on the sons, Vlada (11) and Dusan (8) as they navigate the complicated waters of “becoming American”. Then, in an unimaginable twist of fate, on September 11, 2001 Ljilja finds herself working on the 80th floor of one of the Twin Towers while her sons wait anxiously from the sidelines to learn of her traumatic escape. Less than two years later, Vlada, now a young man, tries to make sense of the world around him as the War in Iraq unfolds. We follow him through his complex quest for personal and national identity. Filmed over 5 years, Escape delves deep into global issues, and yet remains an intensely personal story.

Darko Lungulov (Director) is an award-winning director and screenwriter. Originally from Serbia, he moved to New York City in 1991. His debut feature Here and There won the Best NY Narrative Award at the 2009 TRIBECA Festival and won 20 awards at more than 50 international festivals. It had a theatrical release in the US, Germany, Switzerland, Hungary, Greece and was sold to 21 countries. Darko co-wrote and was a supervising director on Good Wife, directorial debut of renowned Serbian actress Mirjana Karanovic, which had its world premiere at SUNDANCE 2016 in competition. It was screened at more than 40 festivals since and have won over 10 Awards, most notably at Göteborg Film Festival, Cleveland International Film Festival, Vilnius International Film Festival. Darko’s 2014 film, Monument to Michael Jackson, had its World premiere at 2014 Karlovy Vary International Festival and won The Best Eastern European Award at its USA premiere at Santa Barbara International Film Festival 2015. Since 2015 Darko is in production of music documentary The Last Band, a film that follows the carrier of legendary Yugoslav rock band YU Grupa (The YU Band).

Please join us for this screening and Q&A, hosted and moderated by Rafael Parra, Associate Professor in the School of Media Studies.

Presented by the Graduate Certificate in Documentary Media Studies

Presented by Media Studies at the Schools of Public Engagement 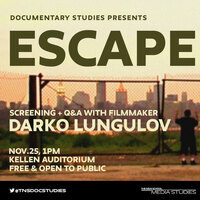