Designing and Leading Organizations for Inclusion

A Panel Discussion diving into the complexities of diversity in the workplace. Diversity and inclusion are a moral imperative and a practical necessity to create a flourishing society. To meet this need, we need to be intentionally attentive to building inclusive workplaces. Join the conversation with academic experts and practitioner-leaders on how to design and lead organizations for inclusion.

Smith holds a Ph.D. and M.B.A. in Organizational Behavior from Case Western Reserve University and a B.S. in Computer Science from Spelman College. She is a co-author of the book Beyond Inclusion (2014, Palgrave Macmillan) and several academic journal articles. Within the Academy of Management, she has served as a past chair of Management Spirituality and Religion (MSR), Newsletter Editor of Gender and Diversity in Organizations (GDO), and current Communications Chair of the Diversity and Inclusion Theme Committee's (D&ITC) Executive Committee. She is a mentor and facilitator for The Ph.D. Project's Management Doctoral Student Association. She is an active member of Alpha Kappa Alpha Sorority, Inc., American Mensa, and Greater St. Luke AME Church. She has also served the United Way, National Alumnae Association of Spelman College and the United Negro College Fund's Inter-Alumni Council of Los Angeles. Smith is a nationally known organizational consultant, author, and speaker regarding workplace inclusion in corporate, not-for-profit, educational and military workspaces.

Demetra Pappas, JD, MSc, Ph.D. Part-Time Faculty at the New School, Foundations of Diversity and Inclusion in the US Workplace

University School of Law, an MSc in Criminal Justice Policy from the London School of Economics and a Ph.D. in Law and Sociology from the London School of Economics. As a lawyer, Dr. Pappas’s work was based, in large part, of dealing with the effects and consequences where there is a lack of diversity and social inclusion, as a Legal Aid Lawyer, a PINS mediator for the Children’s Aid Society, a judicial law clerk for the first Hispanic justice on the Appellate Division in New York State, an Administrative Law Judge and the Director of Special Projects at a National Law firm (where she engaged in an anti-stalking project regarding the creation and implementation of New York’s anti-stalking law, in school and workplace scenarios). Dr. Pappas had taught about diversity and inclusion/exclusion in Law and the Legal System; Sociology/Anthropology of Health and Medicine; the Legal Environment of Business; as well as Life, Death and the Law, among others. She has also authored dozens of articles, book chapters, panel presentations, book reviews, encyclopedia entries, and the like regarding diversity and inclusion/exclusion of race, gender, sex/gender, sexuality/sexual orientation, ethnicity, national identity, disability, religion, and social stratification/social inequality (including in national disasters); she has done this both as to American society and others, and in comparative studies. She has written a book on the politics of euthanasia and assisted suicide and is working on a book about the politics of genetic testing for Huntington’s Disease, as well as a study of restaurant workers.

Dr. Stephanie Szitanyi is the Assistant Dean of Part-Time Faculty Affairs at the Schools of Public Engagement at the New School. She holds a Ph.D. in political science from Rutgers University. Her research focuses on female political representation, gender relations in military institutions, and the militarization of American culture, and has been published in the International Feminist Journal of Politics. Her forthcoming book, Gender Trouble in the U.S. Military: Challenges to Regimes of Male Privilege (Palgrave 2019) investigates challenges to the U.S. military’s gender regime of hetero-male privilege by examining recent military policy changes related to gender including Don't Ask, Don't Tell, the women in combat ban, and the military's handling of sexual assault. She teaches courses on gender and war, women and terrorism, militarism and militarization, and is a regular Op-ed contributor for the online news source The Hill.

For more than 25 years Sujatha has worked as an activist, organizer, and scholar in a range of social justice movements and is a leading voice on new practices in movement building with a focus on race, gender, innovation, and human genetics.

A professor of professional practice in Management, Sujatha is also the founder and faculty advisor for Social Movements + Innovation. A serial start-up leader, she was the Executive Director of CoreAlign, a reproductive justice organization teaching innovation for social change to frontline activists, which she founded in 2012. And before that, she was the founder and Executive Director of Generations Ahead, highlighting the social justice and eugenic implications of emerging genetic technologies.

In her work, Sujatha focuses on forging unlikely collaborations and looking past forced simplifications at the intersection of issues too often considered separately. Sujatha has worked skillfully with a broad and diverse range of leaders, community members, activists, scholars, researchers, and academics, listening for patterns and trends to prepare for the challenges around the corner and into the future.

Presented by The Milano School of Policy, Management, and Environment at The Schools of Public Engagement 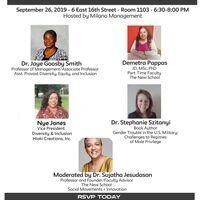