**This event has been cancelled. Thank you for your interest**

Join us for a public lecture on Artistic Pursuit and Innovation in Chinese Games with Colin Yao, Vice President of Tencent and Head of Tencent Games’ TiMi Studios Group. TiMi was founded in 2008 and is a premier interactive entertainment developer, committed to offering players enhanced gaming experiences.

Mr. Yao, an award-winning and influential game producer and designer, is regarded as one of the top 10 leading figures in China's gaming sector. His representative entertainment titles include Arena of Valor (AOV), Honor of Kings and QQ Speed. AOV was the first Chinese mobile game to reach over 10 million daily overseas active users. There are more total registered players of AOV and its Chinese version, Honor of Kings, than any other mobile game in the world. King Pro League (KPL), which was launched in 2016, has reached the highest professional standard for Esport tournaments in China.

Mr. Yao joined Tencent in 2006, and has witnessed the evolution of the Chinese gaming industry from its inception to what it is today: a highly professional and internationally competitive sector. He has shared his insights by penning columns for prestigious media outlets and co-authoring several books on game design and production. He believes that successful design comes from a sophisticated understanding of player behavior. Mr. Yao devised the “Mushroom Theory,” which has had a deep impact on China’s gaming industry and development of talent in the field.

Under his guidance, Honor of Kings, has leveraged its extensive influence with young users to foster a greater understanding of Chinese traditional culture by innovatively incorporating a blend of classical elements such as Kunqu Opera and Dunhuang’s Flying Goddesses. TiMi Studios Group is committed to fully tapping the game’s potential to benefit society. See and Air Shadow are two new games intelligently designed for people with disabilities that aim to address the needs of players who are visually impaired in China.

Mr. Yao believes that being able to move people emotionally is a valuable art work. He has relentlessly pursued the creation of innovative and quality games that allow players the freedom to unleash their imagination. He also has a keen interest in offering experiences across games and movies.

Mr. Yao launched the Tencent DN.A (Digital Natives Action) educational platform in 2018 to promote online literacy among children aged 4–14. It advocates for the participation of parents, schools and social communities to help guide young people use the Internet wisely. As a father, he believes that every child has unlimited potential for self-development and that parents should trust their children and ensure they spend more high-quality time with them.

Presented by Global Partnerships and the Office of Development at The New School.

Art and Design, Media and Technology 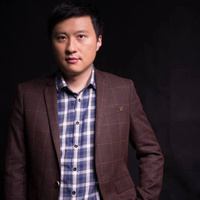